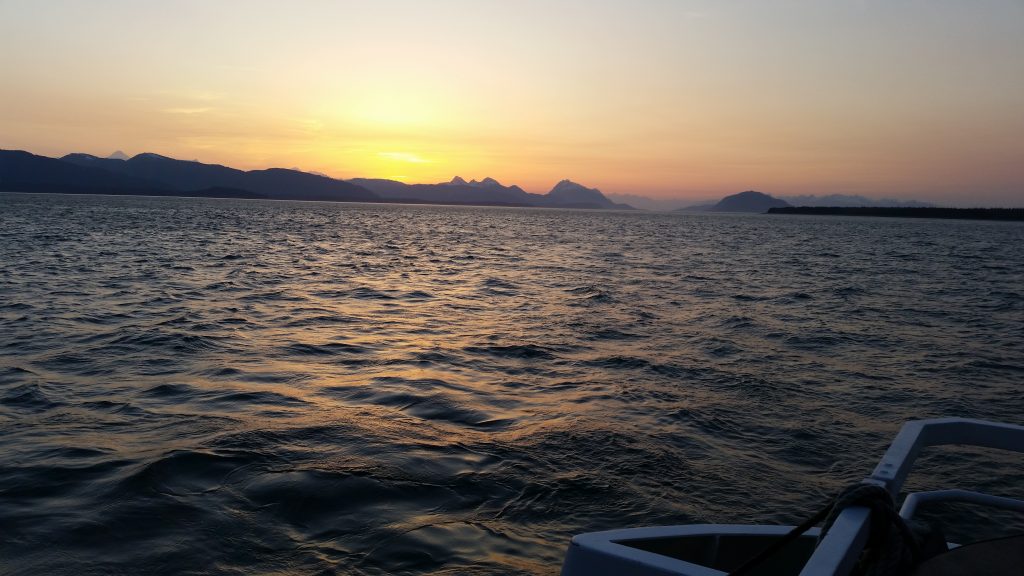 Diary writers have an affinity for the dash, a fluid and flexible punctuation mark used to propel spontaneous writing forward.  Hinged on a dash, the sentence pauses before starting to swing in another direction. Or a voice momentarily interrupts itself, cutting off an unfinished thought to launch a new idea.

Physically, when writing by hand, a dash is quickly accomplished by scooting a horizontal mark across the page, even before figuring out whether you’re ending a sentence there or planning to extend the same sentence in your next phrase.

Consider how Frances Burney writes in her diary, upon learning that the great Dr. Samuel Johnson has praised her first novel, Evelina: “But Dr. Johnson’s approbation!—It almost crazed me with agreeable surprise—it gave me such a flight of spirits that I danced a jig to Mr. Crisp, Without any preparation, music, or explanation;—to his no small amazement and diversion” (August 3, 1778).

According to Anna Jackson, who devotes a full chapter of her book Diary Poetics to the dash, a dash-filled passage conveys the sense of prose flowing at a rapid pace. With a series of dashes, the writer may easily leap from one idea or item to the next without having to explain the connection or insert a logical transition. The resulting series of images or details can pile up into a list, strung together into an indefinitely long series.

The relationship among items on a list separated by dashes doesn’t need to be spelled out. If each new diary entry starts afresh, juxtaposed to the last entry but holding no expectation that it must refer back to what was said before, a sentence containing dashes does the same thing on a smaller scale, mirroring in miniature the diary’s formal parataxis.

Especially when combined with exclamation points or question marks, a habit of using the dash can produce an effect more like natural speech than like formal prose. Before completing one thought, the dash leaves off to take up a new idea, as in conversation with a close friend, where mutual understanding makes explanations unnecessary.

In this casual mode, the dash can suggest that we’re following the writer’s thought process in real time. Dashes imitate a mind at work, as each phrase seems to prompt the next by association or proximity. Sometimes the dash is followed by a correction or comment on what went before, or it prefaces the discovery of what Jackson calls “the perfectly chosen word” to crystallize what the diarist has, up till this moment, been attempting to say.

As for mood, depending on the subject matter a profusion of dashes may convey a sense of agitation and lack of focus—or conversely, the dash could create a deliberate pause or gap, to slow things down where normal syntax would shove the message onward. As an example, Anna Jackson cites the reflective and delicate mastery of this punctuation mark in Emily Dickinson’s poems “to open up an interior, emotional space” (121). Whether that space in a Dickinson poem holds reflection open at the end of a line or inserts a gap in the middle of a line, it compels the reader to pause for a moment and think (or feel) before going on.

Because a dash, like taking a breath, can be followed by almost anything, it seems (again, like the diary itself) to resist finality and closure. Toward the end of her chapter on the dash, Anna Jackson suggests that these moments point toward what can’t be contained, and so befit themes and material that exceed what the writer is able to express. In this sense, the dash gestures toward the limits of language.

Katherine Mansfield recalls seeing a foaming wave “suspended in the air before it fell” and writes: “In that moment (what do I mean?) the whole life of the soul is contained. One is flung up—out of life—one is ‘held,’ and then,—down, bright, broken, glittering onto the rocks, tossed back, part of the ebb and flow” (Journal, p. 150). 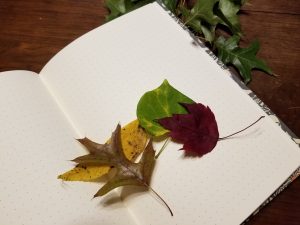 On this day of the equinox, we find insight in an essay by Maria Popova, who writes on many topics in her online column, “Brain Pickings.” Popova describes autumn as the season most difficult to pin down, a time that can seem “temperate” as easily as it becomes “tempestuous”—a season often associated with the approach of winter and a process of inevitable loss, decline, and decay, while at the same time celebrating the abundance, ripeness, and fruition of yearly harvest.

The changing length of days continues to provide the most predictive cues for many organisms that adjust their physiology or behavior in accordance for the timing of vital activities like migration, reproduction, or hibernation. Days grow shorter during the entire time between summer solstice and midwinter; today we have reached the midpoint, the balance. How do the extending hours of darkness and the ever-scarcer hours of daylight affect patterns in your own day-to-day, journal-keeping life?

Maybe it’s easier to sleep on cooler nights, or harder to get up when the sun hasn’t finished rising. David Glaser, director of the Science Gallery at King’s College London, writes that many animals “become frisky in spring and hibernate over the winter.” Does time feel deeper or slower at this time of year? For many plants and creatures, “sensors of various kinds nudge [them] to keep track of the earth’s rotation around the sun” (Science Weekly, The Guardian, 14 January 2018). Can we still sense this rhythm?

Surrounded by artificial lights and temperature controls, having much the same range of foods to choose from all year round, and spending little time unprotected in the outdoors, to a large extent we have the luxury of ignoring the fluctuations of seasonal change. We don’t feel the physical effects or depend on reading the signs of earth and vegetation as vitally necessary to decisions that determine our food supply or preparation for getting through winter.

We have an abundance previously unknown—a year-round harvest season—and maybe also a loss that’s harder to register, a sameness of experience regardless of time of year. The practice of keeping a journal, especially one that observes nature over time (a phenology journal) can help to recover the balance of seasonality, the varying rhythms of outdoor experience, and an acute awareness of this halfway-between moment, the equinox of the year. 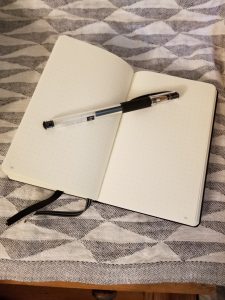 Today’s diary-keepers face a decision: Will you make marks on paper with a hand-held writing implement, or enter typed text from a keyboard into an online file?

Both sides have passionate adherents, and while there aren’t too many things you absolutely can’t do in the “other” format, the time and effort involved may differ tremendously. In short, some things that you might want to do with your diary come more naturally with a physical book, while other desired results come more rapidly and easily in a digital environment.

Ten points to keep in mind as you weigh the pros and cons of a cyberdiary: 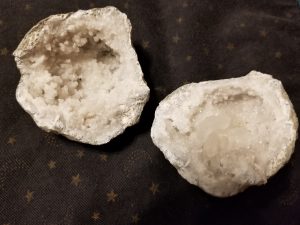 Diaries can heighten awareness of the immediate moment—for example, by writing a “here and now” entry—but they also offer a chance to interpret Now or “the present time” more broadly, as the current phase or chapter in one’s life.

Two classic books on journal-keeping explore ways to expand the present moment into a longer time-period from which to move forward. “There are steps to action, but no formula,” says Christina Baldwin in her book Life’s Companion. Baldwin claims that you can more clearly see the steps toward positive change once you establish a clear understanding of where you are now.

Adopting an honest view of the current reality is crucial, because as Baldwin adds, “we need to make use of the world as it is. Only from the position of being fully in the world can we influence it” (285). To this end, Baldwin offers a sentence-completion exercise that repeatedly opens with the stem phrase “Current reality is . . . “ She invites journal-keepers to create a page of sentences each beginning with that stem, to “make an objective list of the circumstances in your life.”

After listing the factual circumstances, Baldwin next suggests using the same sentence-stem (“Current reality is . . . “) to detail, in simple declarative statements, the emotions felt by the journal-keeper about the circumstances listed in the first part of the exercise. Though it may not seem like this exercise would reveal anything that the journal-keeper doesn’t already know, try it! Many have found clarifying value in writing out these lists and seeing what emerges, as a first step toward action for change.

A more intuitive way to place oneself between past and future, or “position oneself in the present,” comes from Ira Progoff’s Intensive Journal method. “Now is not limited to the immediate instant,” Progoff writes in his book, At A Journal Workshop. Instead, “we stretch the present moment back as far as it needs to go in order to include as much of the past as is still an active part of the present.”

This “present moment” could be longer or shorter depending on the person. It usually goes back to some significant event that continues to influence the writer’s life. Progoff writes:

To launch this exercise Progoff asks the writer to take a few minutes, with eyes closed, to reflect on the implications of the question, “Where am I now in my life?” Instead of thinking about it deliberately, the goal is to relax in a meditative state, allowing an image or sensation to emerge in response to this question. The awareness may come in many forms—perception, symbol, metaphor—and can be described with the sentence stem, “It is like . . . “ followed by a description of what has revealed itself.

As a final step to consolidate this insight, Progoff has the journal-writer step back and look at this present period more consciously:

For Baldwin and Progoff, the purpose of dwelling in the present and understanding the “now” is ultimately focused on the future. “Present time” entries build a vantage point from which to envision and set forth in a new direction. Such a dynamic model implies that circumstances continue to change, and that the journal-keeper can choose where to go from here.

Mari McCarthy’s website, CreateWriteNow, encourages personal writing and diary-keeping for healing purposes. Numerous research studies suggest that reflective writing, such as keeping a journal, can be directed toward promoting the well-being of body, mind, and emotions.

Mari invited me to write a guest post for her blog, Journaling Journeys, and I was glad to oblige. “Tap into the Power of Diaries” went live on September 2, 2019: 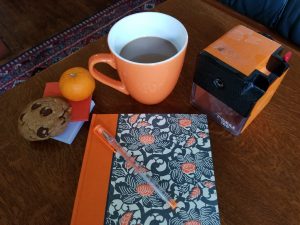 “Most advice about journaling encourages us to simply ‘pick up a pen, grab a notebook, and write down your thoughts.’ A sense of freshness and spontaneity helps people get started. But journal writing didn’t begin five minutes ago . . . ”