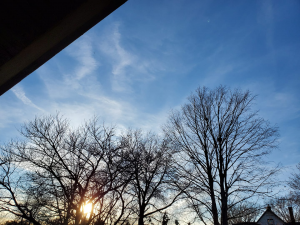 During this season, time extends for hours after the sun has disappeared and before it’s time to go to bed. After an evening walk in the cold to experience the blue glow of moonlight on fallen snow, the perfect time sets in for journal writing.

A swirl of traditions, some widespread across cultures and others unique to your family, gather around the winter season. In a journal, this time works well for considering how a cycle may pause at its deepest, darkest point before turning to move steadily toward the light. Many winter holiday traditions focus on that image of solstice as a signal of change and hope.

The annual repetition of rituals and customs can also draw attention to powerful changes that have taken place between the past and now. This time around, more of us are gathered in the house to hail the special day–or maybe fewer.  Someone is missing who formed an important part of the festivities in years past. A dear new arrival is celebrating with us for the first time. That changing presence in the house, whether waxing or waning, brings a snow-drift surge of reflections and feelings that may find their way into your journal.

Late December also marks the turn of a calendar year. The most popular time to begin a new journal or start a new volume is January 1.

So when the chill and darkness bring on a sense of isolation, or when the brightly colored bustle, noise, and pressure of social expectations begin to overwhelm, think of the people who sit in many different locations but share in the same community, each one writing a new year’s date at the top of a new year’s first entry. The group includes curious newcomers taking up a blank notebook for the first time and experienced journal-writers committing to renew their practice for yet another not-yet-explored, still-in-the-future year.  Join us!

This column was published Dec 2, 2019 in The Washington Post’s “Made by History” section:

How Michelle Obama ‘goes high’ in the new Becoming journal

Paula Vene Smith is a professor of English at Grinnell College and author of “Engaging Risk: A Guide for College Leaders.”

In November, Michelle Obama released a companion volume to her best-selling memoir, “Becoming: A Guided Journal for Discovering Your Voice.”

The new book is inspired by Obama’s discovery of a diary she had kept 20 years earlier. We got a glimpse of this diary in her memoir when she shared a passage from its opening entry, which explains why she decided to put pen to paper. “One, I feel very confused about where I want my life to go. What kind of person do I want to be? How do I want to contribute to the world? Two, I am getting very serious in my relationship with Barack and I feel that I want to get a better handle on myself.”

This is all we know about the content of her own diary. But Obama bases her guided journal on the same two purposes: framing one’s life story and preparing for activism. As readers make their way through the workbook, alongside standard personal prompts such as, “How does nature nourish you?” or “Write about a favorite photo,” they are asked new questions that seem simple, but that push toward ideas of justice, inequality and change: “Where did your ancestors come from and what challenges did they face?” “How do you connect with your community?” “What changes — whether on a local, national, or global level — do you wish to see?” “How do you bring your own history, culture, and experiences into spaces where they never existed?” “Have you ever considered taking on a leadership role?”

Like influential figures before her, Obama is paving the way for a new trend in personal writing that could have powerful reverberations for inspiring awareness and action both today and in the future.

Since its earliest appearance in English letters, the diary as a form of writing has continually adjusted itself to the cultural moment. But the diary has also produced examples in each generation that go against the grain. Such diaries have influenced the moment by using this flexible, easily overlooked genre in ways that challenge how contemporaries understand the world around them. Today, extending a project that began with her memoir, Obama is joining that tradition.

When the practice of journal writing first gained popularity, as Alexandra Johnson relates in “A Brief History of Diaries,” most examples followed a Puritan tradition that “stressed conscience and confession.” While myriad Londoners maintained somber records of spiritual self-examination, Samuel Pepys exuberantly took the opposite direction, conjuring up his own “portrait of seventeenth century life, both as participant and spectator.”

Calling up vivid details and a flair for storytelling, Pepys chronicled his marital strife and serial infidelities, shared his enjoyment of favorite foods and music, made sure to total up his net worth on the last day of each year and dished on what he heard and saw of political intrigue at the court of Charles II. Pepys made sure that his secret diary was preserved for posterity, but it wasn’t decoded and published until 1825 — and for a long time afterward, editions of the published book omitted many of its salacious details. Even today, Pepys’s diary remains among the most famous and frequently cited examples of the genre.

One notable reader inspired by Pepys was Virginia Woolf. She, too, challenged the prevalent model for diary-keeping in her time. Woolf developed an approach that veered dramatically from “the current vogue for confessional and lengthy intimate reminiscence.” Woolf noted how her friends treated their diaries as receptacles for their thoughts and feelings: “I haven’t an inner life,” she declared, and used her diary instead as a space to practice experiments in style.

Scholars of Woolf’s work, notably Barbara Lounsberry, have traced her use of the diary form through her career, connecting it with her development as a major modernist writer. Lounsberry’s three-volume study of “Virginia Woolf’s Diaries and the Diaries She Read” makes it clear that even as she steeped herself in the diary tradition, Woolf took the form in new directions and established a path for those who came after her. If the diary can be regarded as a serious literary endeavor, this is largely thanks to Woolf.

Throughout the 20th century, the diary form continued to adapt to cultural demands and, at times, to challenge norms. Religious diaries are more likely now to inspire and affirm faith than to confess and tally sins. Varied uses of journal-keeping to boost mental and emotional health have evolved in tandem with the advent of each new school of psychotherapy.

But diary-keepers with heightened respect for the powers of language are most likely to take the form in unexpected directions. Recently the poet Harryette Mullen published “Urban Tumbleweed: Notes From a Tanka Diary” based on an assignment she gave herself for one year. She took a walk outdoors each day and wrote a short poem about nature as encountered in a California city. The image of “urban tumbleweed” refers to wind-buffeted plastic bags.

Mullen’s work reveals how diverse journal-keeping has become, as people look for different forms to prompt and shape a sequence of daily entries.

That search has created a market for journal workbooks and how-to books about diary-keeping, as readers actively look for guidance. Obama’s new book provides such a model.

But she is also the latest writer to go against the grain, as her book challenges two dominant models that have emerged in recent years: the bullet journal and the gratitude journal.

Ryder Carroll’s bullet journal swept the Internet in 2013 as a new system for productivity and personal organizing. Incorporating to-do lists, calendars, planning charts and habit trackers, a host of online bullet journals try to outdo each other in artistry as users display their skill in calligraphy, ornamental borders and creative page layouts.

Improved efficiency, progress toward fitness and professional goals and ramped-up productivity dominate the world of the bullet journal. The gratitude journal, on the other hand, requires listing and appreciating the abundance of reasons one has to feel joy and comfort.

It is this focus that Obama is challenging with “Becoming: A Guided Journal.” Her book encourages readers to identify key turning points in their life stories and to make their stories serve a larger purpose. The focus is not just on the self but also on social change. With this bold invitation to rethink the journal’s purpose, Obama joins a tradition of challenging what most people are doing in their diaries. She brings the political message of going high to her readers on a personal level, exhorting them to think beyond themselves. If it works, the activist journal could be the next trend in the centuries-long tradition of reflecting on one’s own life in a diary.