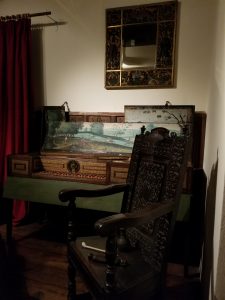 In the midst of reading a diary from long ago, pause. Take a moment to imagine your own future readers—readers who will never meet you, but who will know you from your diary.

Does it make sense to keep a journal for someone fifty years from now, or in the next century? What would a 2075 historian look for in your diary?

Original diaries, even from the recent past, do serve as primary sources for research. And historians working with them occasionally express a wish that the diarist had included more information on certain topics, or had ventured personal opinions beyond just factually recounting events of the day.

Laurel Thatcher Ulrich chronicles the life of Martha Ballard in A Midwife’s Tale (1990), probably the most acclaimed work of American history ever based on a diary. Refusing to be daunted by mentors who warned her that she would find Ballard’s diary dull and scant on historical significance, Ulrich used contextual material and nuanced interpretation to write a Pulitzer-Prize-winning book that illuminates much about life in a Maine seaport town at the turn of the 19th century.

In her introduction to A Midwife’s Tale Ulrich admits that “one might wish for more detail [in the diary], for more open expressions of opinion, fuller accounts of medical remedies or obstetrical complications, more candor in describing physicians or judges, and less circumspection in recording scandal, yet for all its reticence, Martha’s diary is an unparalleled document in early American history. It is powerful in part because it is so difficult to use, so unyielding in its dailiness.” (33)

This historian’s wish indirectly offers an idea that today’s diarists might use as a road map: While future readers could appreciate the dailiness of our diaries, perhaps we could shape a life-record (and a future historical source) of heightened value. So, if we take the advice implied in Ulrich’s words, let’s make sure to incorporate explicit details about our everyday activities, candidly appraise any person in a role of authority (or fame) with whom we interact, elaborate fully on any local scandals we witness or hear about, and above all, hold forth with personal opinions on issues of the day.

Historians are cautious, though, in offering advice to diarists. With the advent of digital information storage and electronic communications, the landscape of publicly visible personal data has wildly proliferated since people in the 1790’s, or the 1970’s, kept their diaries. Far from making a trek to study the rare diary found in an attic or an archive, historians who study life in the 21st century will instead feel assaulted by tsunamis of personal information. They’ll have records of people’s purchases, tastes in entertainment, social media, political preferences, countless photos, emails, and storage folders filled with miscellaneous documents. Far more data about ourselves will live on in the contours of our electronic footprint than we could ever hope to inscribe in our diaries.

Does this mean future historians will ignore diaries? Or can diaries preserve knowledge or perspective that risks being lost among the digital ephemera, the sum of all the clicks made on our keyboards?

Historians I’ve consulted point to the reflective and (at least temporarily) private nature of traditional diaries as offering something different from raw data or even a series of public posts. Personae on social media value the instant, the first impression, the snapshot, the race to relay gossip or make a clever quip before someone else gets there first.

While sharing this acuity of perception and sense of “now,” journal-keepers take time to process an experience before sharing. Difficult thoughts and trade-offs leading up a big life decision may get recorded in a journal, while only the concrete outcome of the decision (the soft-focus photo of engagement rings, the invoice of a purchase) survives in the electronic record. This difference suggests that, as a diary keeper, one way to make your pages valuable to future readers may involve chronicling the gradual shifts in social, cultural, ideological, and linguistic evolutions currently underway.

Diarists have the chance to open a unique window into their historical age. I can plot tiny local points on the vast arc of change simply by noting “what’s new”—the arrival of the latest gadgets, trends, pastimes, customs, attitudes, role expectations, and even spoken expressions that weave their way into the everyday world of my workplace, my social groups, my neighborhood. What casual conversations did I have today, and what did they reveal?

A classic diary exercise involves making two lists: “What’s currently receding, coming to an end, a waning influence on my life?” and “What new thing appears now on the horizon, enters my life, calls out for attention?” Applying these questions on a scale just beyond the personal, you can speak directly to readers of the future, addressing their curiosity about what just arrived today in your community and beyond.