Terms like sleep, waking, and dreaming may be too crude to capture accurately the fine structure of consciousness. Our vocabulary for describing states of consciousness is still too undeveloped. 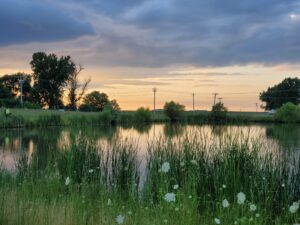 Somewhere between wakeful consciousness and sleep, the mind encounters an intermediate phase of awareness—a meditative doze, often studded with bizarre imagery. This mental state, a portal between sleep and waking, is easily crossed though by most people, a dimly-perceived way station as they travel onward into their day or into their night.

But either by serendipitous occurrence or when sustained as an intentional practice, the “twilight” state has long been mined by creative thinkers and artists. Famed historical examples of scientific discovery, technical innovation, and works of art or music first came to their inventors as visions in proximity to a dream.

Described by some as “dreamstorming” and by others as “active imagination,” deliberately cultivating and exploring this elusive state may offer intriguing rewards for a journal-keeper who has tried all the basic methods and now seeks new adventures.

The easiest time to experience a twilight state—but not the easiest time to write about it—is when you’re lying in bed either tucked in to sleep or just waking up. What you can do at this time is to focus on and appreciate the transition into sleep (or into waking) as it unfolds in real time. A small girl I met at a campsite several summers ago described confidently to me that when she went to sleep at night in the tent, she watched for the movie that would always begin after her eyes closed.

As you relax, note how images appear behind your closed eyes or through the blur of half-closed eyelids. These images are not quite dreams because you’re not asleep, but they also don’t correspond to what occupies your surroundings—say, your bedroom—as observed when awake.

The scientific terminology for these visions are hypnogogic (when falling asleep) or hypnopompic (when waking up) experiences. As in dreams, and sometimes continuous with the content of a dream, the content of these images can range from human or human-like figures to landscapes and interior settings, sometimes even taking the form of glowing lights or shifting geometrical forms.

Your first conscious thoughts upon waking, if not too fleeting to retain, often carry insight that feels like it was dredged up to the surface from the depths of your sleeping mind. More pragmatic than a dream journal, a notebook to jot down these first thoughts—whether it takes the form of a prompt for something important you need to do today, a sudden fresh approach to a problem you attempted to solve yesterday without success, the vision of a potential creative project, or just the impulse to get in touch with someone you haven’t had contact with in a while—might represent your next step in this project of cultivating the sensitive mental state at the boundary between sleep and wakefulness.

After trying these initial steps for several nights and mornings, enjoying an easy familiarity with the dreamy state of letting images arise, you may feel prepared to “dreamstorm” or conjure up twilight imagery in the middle of the day, while sitting in an upright (or comfortably lounging) position with your journal at hand or at least some loose blank pages, prepared to write.

The clearest and most detailed guidance for journal-keepers on “working actively in that intermediate state of consciousness . . . the twilight state between waking and sleeping” can be found in Ira Progoff’s book At a Journal Workshop (57).What Progoff calls “inward perception” is achieved by closing one’s eyes, becoming calm and still as if preparing to meditate, and simply observing without judgment or interpretation the perceptual imagery, visual or nonvisual, that comes into the mind. Progoff’s Intensive Journal system leads participants through a process of recording and interpreting such imagery to cultivate insights that may elude us when we restrict ourselves to rational, step-by-step cognitive reasoning.

A more streamlined, if less thorough version of this practice can be found in KT Mehra’s “How to Use Active Imagination in Your Journaling” on the CreateWriteNow blog. In this essay Mehra outlines a simple five-step method for activating one’s untapped “visual and imaginative faculties” by “loosening the rigid focus” of regular daily thought patterns.

While intriguing to explore in a journal, the fruits of twilight imagery or active imagination may also serve a broader purpose for poets, composers, and other creative artists. Robert Olen Butler’s book for fiction writers, From Where You Dream, advocates this approach: “It’s a funny state. It’s not as if you’re falling asleep at your computer, but neither are you brainstorming. You’re dreamstorming, inviting the images of moment-to-moment experience through your unconscious. It’s very much like an intensive daydream, but a daydream that you are and are not controlling. You let it go, but it’s coming through language that you’re putting on a screen, so there is some intervention on your part, and yet the essence of it—that rainy street and that dog barking and the lamplight—are nothing you’re going after consciously” (31).

Whether you call it dreamstorming, working with twilight images, or using active imagination, the key to this process seems to lie in learning how to “control, yet not control” the way it unfolds. With practice, the goal is to settle into a rhythm: intentionally entering a still, receptive mental state, allowing images to come forward and engage in play without interruption, and only then, in smooth and subtle fashion, moving into the more active role of describing and interpreting the flow of inward perceptions yielded by this waking dream.