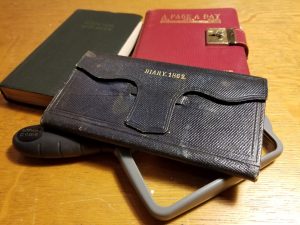 While the book called a diary is built out of words and ideas, we also encounter it as a physical artifact. A diary contains multiple meanings, says Philip LeJeune in his book On Diary: “It signifies by virtue of its paper, its ink, its spelling, and its script, and many other aspects” (47).

Those who study human societies, past or present, sometimes divide their objects of study into examples of material culture and non-material culture. To study material culture involves examining physical objects and places—like tools, clothing, food, and architecture—to understand how people interacted with things and how they shaped the spaces around them. Figuring out how they handled material possessions can clarify and at times complicate the picture of the non-material culture (concepts, imagery, values, beliefs) by which that group of humans lived and behaved.

The material qualities of a diary—what it’s made from, the type of binding, texture of paper, color of ink, margins, page numbering, placement of headings, presence of a title page, the writer’s penmanship, added annotations, preserved mementos tucked or affixed inside—all contribute to the diary’s total meaning. Some clues are intentionally inserted, while others reveal things about the writer’s status that we might not know from their words alone. For example, even a reader primarily concerned with the words may observe how size and evenness of the hand-lettering unconsciously alters when the writer feels intense emotion or fatigue.

Part of the freedom associated with keeping a diary resides in the impulsive choices, some textual, some material, that its writer can make. As Tristine Rainer offers in her book The New Diary, “At any time you can change your point of view, your style, your book, the pen you write with, the direction you write on the pages, the language in which you write, the subjects you include, or the audience you write to . . . You can paste in photographs, paper clippings, cancelled checks, letters, quotes, drawings, doodles, dried flowers, business cards, or labels. You can write on lined paper or blank paper, violet paper or yellow, expensive bond or newsprint. It’s your book, yours alone” (28-29).

Anaīs Nin reveals that “all of my diary volumes have enclosures: loose pages written unexpectedly on the run and later inserted into the diary, and occasionally a photograph, a letter from a friend, a newspaper clipping, a recipe from that time” (cited in Marlene Schiwy’s A Voice of her Own, 56).

While diary enclosures can revive memories for the writer coming upon them years later, their tactile nature also has power to connect the writer with other readers in an unexpectedly intimate way. Anna Jackson describes how in her research on Katherine Mansfield, “I was particularly affected by the preserved kowhai flower I came across between two pages in a notebook. After all this time, there it still was, still yellow, still between the same two pages Mansfield had placed it between all those years ago. A piece of the world she wrote about was right there as a piece of the world still, not a piece of writing. This is the diary as capacious hold-all in a surprisingly literal sense” (Diary Poetics, 17).

If you have a chance to read an unpublished diary, look carefully for these extra clues. Consider, too, what someone could tell about you from how your diary presents its material self. Does the physical body of the diary speak nonverbally? When read with care, a diary will convey more than its words can say. 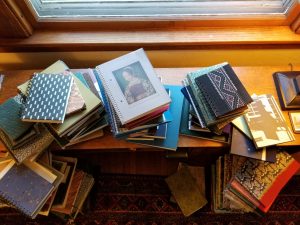 Beginning on a sixteenth birthday, the books of many colors, shapes and sizes accumulate for over three and a half decades. While the set of books may have a few, always telling, gaps—the last semester of high school and first semester of college have no entries, nor does the whole first year of a particularly grueling professional term—for the most part, the diary steadily tracks a life from teenage years across the full arc of family and career.

Its handwriting starts out with squarish loopy cursive letters, then shifts at age 18 to compact, legible printing reminiscent of laboratory notebooks. At times the color of ink is coded to the writer’s state of mind—dark blue for a creative mood, green to explore a change, red for heightened alert, brown for domestic routines—and at times the facing page fills with related notes, quotations, dream accounts, or taped-in mementos.

Many of the books reserve a blank page at the beginning, as if anticipating the addition of a title page. Blank pages appear at the end of many volumes too, giving the impression of a writer who wants to preserve space for additional writing—as if she might find herself locked up somewhere with nothing but these journals, needing to continue to write.

When I dip into the journals, I experience vivid fragments of “what it felt like to be me,” as Joan Didion puts it in her brilliant essay “On Keeping a Notebook.” But I have never sat down and read them all from beginning to the present—a project that could take weeks, or even longer. When a volume ends, I put it on the shelf. But some part of me has always planned to return. Why else keep them? Will someone want to read them in the future? Someone other than the older self of the diarist?

Of all the vast array of books on how to keep a diary, few consider what eventually happens to all those completed volumes. Alexandra Johnson wrote Keeping A Trace, which offers advice for looking back through one’s diary to identify running motifs, patterns, and story arcs that the writer couldn’t yet have perceived at the time of writing. She discusses the diary as a source of insight and material for other writing projects.

Diaries even play a role in history. Historians’ work relies on letters and diaries, not just to record big events, but to reconstruct daily life among ordinary people. Working with 19th-century diaries in a library archive, deciphering their tiny, spiky script to find out what the diarists thought and felt, I sometimes wonder if I’ll bequeath my diaries to an archive, to serve as a record of everyday experience and observations from the late 20th century and beyond.

What to do with 127 volumes of a diary? Currently, the three long rows of variegated books fill the shelves in an upstairs bedroom closet. As the hand-printed lettering—all in blue ink, this latest time—spirals into the last pages of Volume 125, I have the next two blank books standing by, ready to fill. A lifelong habit of diary-keeping ripens into a Journals Project. I have preliminary ideas about what this project may involve, and I’ll write about them in future posts. The first stage involves reflecting and exploring possible directions. Just like the open-ended process of keeping a diary.