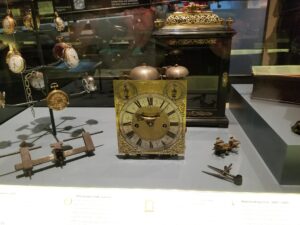 Diaries foreground time. Their structure of periodic, dated (even time-stamped) entries calls attention to the passage of time, day by day.

Historians who study the early modern era, including Stuart Sherman in Telling Time, claim an intriguing connection between the accessibility of portable clocks for individual ownership and the rise of day-based prose narratives like the newspaper and the diary.

New technology allowed people to count minutes reliably for the first time, so they could structure habits and work patterns into smaller increments. “Where church bells and clock towers had for centuries tolled time intermittently and at a distance,” Sherman explains, technical innovation made the progression of seconds, minutes, and hours palpable to the eye and ear: “Huygens’s clocks, ticking steadily, translated time into a sound both constant and contiguous” (4)

The new experience of “closely calibrated temporality . . . became concurrently a widespread practice in prose written, distributed, and read over steady, small increments of real time” (9). The spread of private diaries, daily newspapers, journal-letters published by travelers, and other installment-based forms of writing reflected how Europeans now perceived their position in time.

In a cultural shift that went far beyond just carving up time into smaller units, Sherman argues that through the seventeenth and eighteenth centuries in Europe, a dominant religious focus on eternity and wholeness was replaced by a more secular interest in present and “middle” moments—that is, on what you can accomplish right now: “clock-dials, minute hands, diaries, newspapers, and novels were new precisely in that they called attention away from endpoints and invested it in middles—of the current hour, of the ongoing life—that were sharply defined and indefinitely extended” (21).

“Clocks and watches, by rendering time palpable, audible, and visible . . . established themselves as the new point of reference not only for measuring time but for talking and thinking about it” (24). Sherman turns to the diary of Samuel Pepys—who took great pleasure in consulting “my minute watch” and even gave one to his wife—claiming that Pepys “writes middleness assiduously. . . When Pepys writes up an entry at the end of a given day, he often knows only the story’s middle, and not its conclusion” (94).

A diary’s structure relies on the idea that each entry occupies a “middle” position in time, reinterpreting the past to explain the present, but forever unable to see what happens next. It’s important to note Pepys’ obedience to this diary “rule”: even when he composes a diary entry long after the day in question, in some cases (such as his account of the Great Fire) revising multiple drafts, he still maintains the “fiction” or “contrivance” of limiting the entry to what he knew on that day. As Stuart Sherman concludes, the diary’s “narrative confines itself (regardless of the author’s information) to the timeframe specified by the dated calibration at the page’s edge; illumination as to the direction any given narrative is taking arrives in stroboscopic increments at intervals of a day” (94).

Clocks gave employers the ability to enforce stricter workday routines and productivity expectations, but diary-keepers could track their own progress toward goals, too. Samuel Pepys inventoried how much his wealth had grown at the end of each calendar year; he also used his diary to make rewards contingent on good behavior, such as promising himself that he won’t kiss a woman or drink wine again until he has caught up on a pesky backlog of diary entries.

Even before Pepys, the practice of keeping a diary often involved self-monitoring. Called “heart-watching” in Quaker parlance, this tradition, also associated with seventeenth-century Puritans, was popularized by Benjamin Franklin in his Autobiography and continues to this day in the form of Bullet Journal “habit-trackers” and spiritual journals that chart each time the writer says a prayer.

But apart from the history of technology, we’ve always had clocks inside us, programmed at the molecular level and “entrained” by the seasonal changes in day-length. Our interior timekeepers try their best to optimize healthy schedules that balance eating and digestion, physical exertion and sleep.

Does a connection between mechanical clocks and the rise of the diary make it less relevant for journal-keepers to focus on the physiological cycles our bodies live through in a 24-hour period? Though Sherman does not mention circadian rhythms, I wonder if the new focus on clock-time represented an important step in separating people’s intellectual understanding of time from their bodily sensations.

Clock-time, with its accompanying (often unrealistic) expectations of productivity—not to mention external agents making ever-more-precise demands on our time—have the effect of disrupting internal rhythms. As a result, sleep scientists suggest that people’s bodies suffer from a pattern of ongoing deprivation that begins by overstimulating with caffeine to compensate for insufficient sleep, followed by self-soothing with alcohol when that accumulated caffeine makes it hard to settle down at the end of the day—only to shake off the effects of the alcohol next morning by consuming even more caffeine.

Having learned about the origins of the modern time-sense might offer us a new opportunity in the diary. Consistent with its tradition of self-monitoring, we could steer the journal in the direction of seeking a healthier balance between two competing modes of dailiness: internal bodily rhythms governed by natural cycles, and the external march of the mechanical, industrial clock.