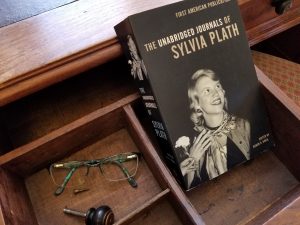 A personal journal brings the reader completely inside the writer’ s head, taking this process to such an extreme of self-reverberation that the reader can see the world only through the diarist’s eyes and hear nothing but the voice of the diarist talking to itself.

“For those who object to a diary’s being a self-portrait, I suggest that the diarist must be present in his own diary as a barometer, indicator, receptor, thermometer, and echo-sounder, as a compass, commentator, footnoter, reporter, documentarist. His presence there is indispensable” (148). In this passage from her book The Novel of the Future, Anaïs Nin lists numerous metaphors of the diary as a tool or instrument to illustrate how a diary frames its writer’s distinctive way of perceiving the world.

Not just the eyes, but the whole body of sensation is shared with the writer as the reader takes in through the language of the diary a world of heat and cold, tastes and smells, discomforts and delights. The reader partakes of sensory experiences perceived through the lens of the writer’s emotional attitude. The same place or event might be felt by different people as exciting, disgusting, ordinary, unusual, satisfying or frightening—specific language used by the diary writer guides the reader in how to react and respond.

In this way a constructed self or “persona” (original meaning: mask) makes its first appearance, gradually takes on a fuller shape, and proceeds to develop layers of complexity as pages of diary unfold. An initial impression formed by the reader after the first few entries—maybe of giddiness, piety, or lack of imagination—is modified as later entries contradict the attitudes originally expressed.

Maybe the writer encounters new experiences that moderate an earlier attitude, or realization sets in that the writer has slipped up in keeping resolutions articulated at the beginning of the diary. With time a young diarist may gain a more mature viewpoint, an idealist may become disillusioned, or journal-keepers highly critical of others may inadvertently reveal their own hypocrisy.

It’s hard to say which we appreciate more as readers: the blossoming of conscious self-awareness, or an insight that the writer misses entirely, even though it’s clearly evident to whoever reads the diary. When reading fiction we might label this experience either dramatic irony or an unreliable narrator, because we know there’s an author pulling the puppet-strings behind the narrator, in control of the effect. The reader of a diary potentially plays a more central role in creating its meaning—that is, it’s up to us to make sense of what happens on the page. We may fill in what the writer never does see, or bring to the diary our privileged knowledge of what will happen after the final entry was written.

As we look through the eyes of the diary and listen to its voice, we temporarily become that self and follow its entries along a path of continual response and adaptation. The following comment by Eudora Welty in her book On Writing could apply to this feature of journal-keeping: “The frame through which I viewed the world changed too, over time. Greater than scene, I came to see, is situation. Greater than situation is implication. Greater than all of these is a single, entire human being, who will never be confined in any frame.”