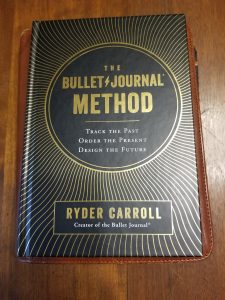 The highly popular Bullet Journal relies on a format perennially used in diaries: the list. A few years back Ryder Carroll created this system to show people “how to neatly funnel all their notes and projects into one notebook.” BuJo, as it’s affectionately nicknamed, offers a streamlined system of trackers, schedules, logs, and occasional longer passages of reflection.

The clarity of a list punctuated with bullet points appealed to Carroll, who originally trained as a designer, because of his conviction that “few design conventions can do so much with so little.” A list collects and orders information in the quickest, most compact, and simplest manner possible. Hence, as Carroll acknowledges in The Bullet Journal Method (2018) “the list is the core design pattern in the Bullet Journal” (255).

Ryder Carroll was not the first to build a journal system around lists. Some of the earliest known diaries rely on list-making, all the way back to the Medieval Japanese “pillow-books.” Sei Shōnagon, poet and court attendant to Empress Teishi (Sadako) around the year 1000, wrote a famous Pillow Book that included her personal collection of entertaining and thought-provoking lists. Her lists have titles like “Things That Give a Clean Feeling,” “Things That Give an Unclean Feeling,” “Things That Seem Better at Night Than in the Daytime,” “Things That Look Pretty but That Are Bad Inside,” “Adorable Things,” “Things That Make One Nervous,” “Presumptuous Things,” and “Things with Frightening Names.”

Lying between the fanciful lists of a pillow-book and the pragmatic value of organizing one’s life with the BuJo system, a spectrum of list-making practices can enrich the content of any journal.

On the most basic level, when life gets incredibly busy and you find yourself with less than five minutes to spend with the journal, a great quick method is to divide the page into two columns labeled with “plus” and “minus” signs. In these columns, simply jot down a few words noting what’s good about your life right now and what’s less than optimal. You can return later to expand on these lists and write more on these topics later, but you don’t have to. Just having these minimal notes will suffice to jog your memory of what mattered during tough times when you couldn’t create a more extensive record.

Conversely, when you find yourself with plenty of time to explore and write, you might be looking for a way to move out of the present moment and pull material from the past into the journal. Ira Progoff’s Stepping Stones exercise, taken from his book At a Journal Workshop (1975) invites you to imagine your whole life up to this point as a set of stages. You give a name to each stepping stone (which you could also envision as chapters in the book of your life). This overview lets you see where you are in your life, from the present vantage-point. In future writing sessions you can select a single stepping-stone to expand, explore through memory, and develop in understanding.

These lists may be relatively short (Progoff recommends a maximum of 10-12 Stepping Stones), but Kathleen Adams, author of Journal to the Self (1990), recommends another practice called Lists of 100.  Adams recognizes that it’s hard to come up with 100 examples of pretty much anything. The exercise permits repeating the same item twice; the point is to write fast, listing as many items as possible, with the understanding that, as in many brainstorming processes, the less obvious and more delayed material could end up proving most interesting and useful.

Lists of 100 can be used for many purposes, mostly involving problem-solving, identifying hidden patterns, clarifying what matters, and generally moving beyond the first few (dozen) obvious items to pull deeper, otherwise inaccessible material from the subconscious mind. Examples that Adams gives include “100 Reasons to [Do X]”; “100 Reasons Not to [Do X]”; “100 Childhood Memories”; “100 Fears”; “100 Possessions I’ve Owned Long Enough”; “100 Decisions I’ve Made That Turned Out Well.”

Like other basic journal methods, the list format can work well to write a single entry, but listing also describes a key structural feature of the diary.  Anna Jackson comments in her book Diary Poetics that “in a sense, every diary is a kind of list of days, sharing with the list the open-ended structure, the paratactic relationship of its units, [whether it’s] the days of the diary or items on the list” (137).